My first collection, I thought I would try something different in the way images are presented on the site. So here are 35+ images for you to download and enjoy! But first, what is it? 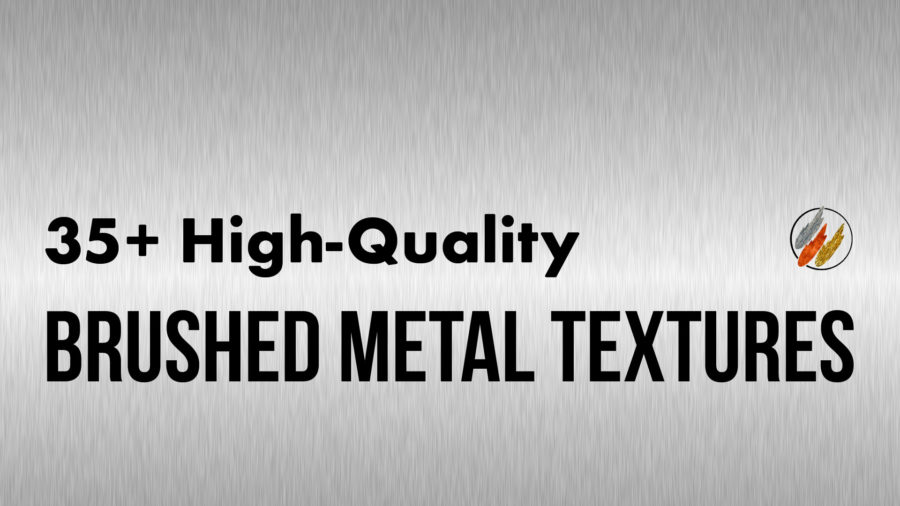 Brushed metal is a finishing technique generally used on steel or aluminium with a unidirectional satin finish. The effect has a distinctive look with a pattern of very fine lines parallel to the brushing direction but increases the likelihood and effects of corrosion. In particular the brushed texture reduces the ability of fluid to bead on the material surface (although I managed to get it to bead beautifully in one of my images – the joys of Photoshop textures :). In particular when used on stainless steel the grooves in the finish will enable rusting to occur.

To create the effect, metal is polished with a grit belt or wheel and then softened with a grease-less compound or a non-woven abrasive belt or pad so that it keeps some but not all of its metallic lustre. In Photoshop it is created by starting with a mid gray adding monochromatic noise and then using the motion blur filter (making sure you crop the edges after as they don’t come out properly).

In digital applications the brushed aluminum or steel style rose to popularity when Apple used it as the graphical basis for their OSX interface having extended it from iTunes, Quicktime and other applications. The reality is that few styles can provide that modern edgy look that you get from a nice metal background and when compresses and scales very well it becomes great for web design or even a simple desktop background. Over time the style was replaced with other themes in OSX. The decline in popularity within the digital world also correlated to a reduction in its use in product design. However, while it’s popularity has diminished it is still not uncommon in a variety of places such as small appliances, whitegoods, various trim and even cars.

Here is a free sheet of brushed aluminum. Nice texture with a narrow shine across the middle

brushed metal background with water drops on it

Here is another brushed metal texture. It could be steel or aluminium by I labelled it silver which of the three it is probably the least likely to be

Another free brushed steel / aluminum metal texture. Somehow I had missed posting this image when I did the other brushed metal images

A free aluminium or steel metallic texture, again reasonably generic on the type of metal.

Free brushed metal texture. It could be either an aluminium or steel background

Here is another free brushed metal background image, a bit of a light effect. I am thinking now it could do with a little more contrast.

Free image of a rough brushed aluminium texture or steel background. Someone went heavy with the grit brush on this one

Brushed Aluminum Textures in a frame

Another brushed metal texture with a frame! I think this one may be aluminum rather an steel but who knows?

This brushed metal texture is so special I put a frame around it. If gets any better I will have to put ‘as seen on TV’ on it

A great free framed brushed aluminum texture, possibly steel if you prefer actually now looking at it I think the frame is going backwards meaning the inside is sticking out. oh well

Another free rendered brushed steel texture. Slight blue tone, handy for many backgrounds or whatever you want

Notice the cool blue tone, that makes this one a brushed steel texture!

Here is brushed metal background texture with a bit of shine. Although reasonably generic metal (aluminium etc) I’d add a little bit more blue to enhance if you want steel.

This is a rough scratched metal background texture that I made.

This one is another rendered / photoshop generated image. It is a golden brushed metal texture, I kept the brushed effect reasonably light and put a shadow through the centre of the image

A brushed gold texture with frame. Very yellow gold this one, I think it may be 18 carat

Hi, This is a brushed gold metal background within a patterned golden frame. A large image it should be useful for a good range of purposes.

A free image of a circular brushed gold texture. Light shine across the diagonal what more really needs to be said

Hi, Here is a good plain brushed gold background texture. Nice narrow light shine down the middle and brushing across the horizontal

brushed gold texture on an angle

Hi, here is a free brushed gold metal background with a nice shine down the middle

Hi, Another brushed copper texture, this one is straight with brushing along the horizontal and the light shine down the vertical

This time it is of a nice orange copper. Light shine on an angle opposite to brushing

Most of time copper is its own distinctive colour, but occasionally it is more red / brown so here is a brushed copper texture that reflects the different colouring

a brushed metal background that I made. Sort of brownish, perhaps it is tungsten

I can’t say that I can ever remember seeing tungsten, but in my imagination this is the colour it is and how it would look if you brushed it.

Well, that’s the end of them for now, I’ll update the post later when I make some more (or when I work out how to reliably get the text next to the thumbnail) and I’ll add a few links at the bottom to some other relevant textures at deviantart.

I always believe in giving credit where it’s due so here are the ref’s (Any teachers / lecturers out there cover your eyes and stop reading now, you can guess what’s coming :)

Hi, Welcome to my site. My name is Phil. About me - Husband, father, geographer, traveler, photographer and all round nice guy :) I have love for the oddities, doors, windows, textures etc and I'm used to the strange looks I get when taking a photo of a wall, the grass, a road or a something I find interesting. Some of those images end up here and I hope you find them useful. Please remember to check the license!

The images of My Free Textures are copyrighted and distributed as royalty free with the only exception being the right to use photos from this website to create a similar or competing service, like a stock photography platform.

What this means is you can use the images for your projects (both commercial -unless a competing platform as stated above- and non-commercial) but you have to give credit and attribution to this site.

Please link back to either the homepage or to the page in which the image is rather than the actual image file.